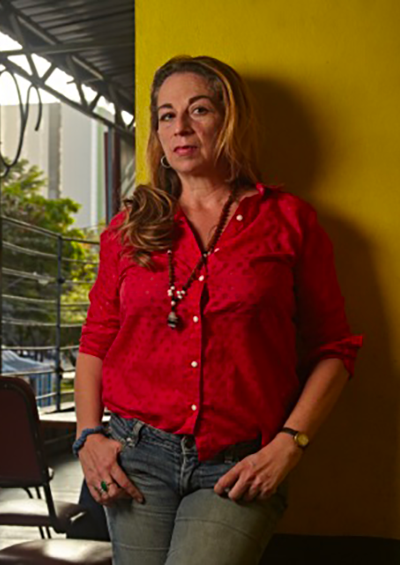 I’ve been a writer all my life, since childhood, I used to write on the walls at home, then diaries and then became a journalist in my 20s. I started writing short stories in my 30s, also I attempted a screen play for a 60 minute feature film; it was called Sam and Delilah and was set in London; that was my first completed piece of creative work. It’s in my collection of papers, somewhere, at the Alma Jordan Library, UWI.

I write for the joy of it. I think it’s wrong to imagine readers. My books have sold in 5 countries, also in USA, and UK, and in the Caribbean. You just don’t know who your reader might be. Never write for an editor, either, or for ‘the industry’. Writing books isn’t about pleasing anyone, be it readers or publishers. I’m a magical realist by nature; that’s just how things come out for me and my first agent told me it just wasn’t commercially viable. I fired him, eventually. If I’d listened to him, I wouldn’t have written any of my books for fear of not selling them. I just write what I want. All my books, bar House of Ashes, are very biographical; they are mostly inspired by my life, what I know and  by my family.

Miguel Street, by VS Naipaul

Again, because I’ve been writing an essay for Wasafiri, I’ve been raking up a few names. I’m also aware that of the 400 or so writers featured on the BBC’s ‘Caribbean Voices’ programme over 15 years, only 71 were women and that’s only 1/5th of the voices featured. It was  bit of a ‘boys club’, as Alison Donnell says in her essay ‘Heard but Not Seen’ [in The Caribbean Short Story Evans, L., McWatt, M. and Smith, E. (eds.) (Peepal Tree Press, Leeds, 2011), 29-43]. Many of the female Caribbean writers of that time have evaporated into thin air. There are over 200 private collections of papers in the West Indiana Collection at UWI in Trinidad. I was the first West Indian woman to add my papers, four years ago, in 2014. I was shocked to find this out.

Michelle Cliff, who died not that long ago. I’d love to read a memoir or biography of her life.

Beyond a Boundary by CLR James.

Yes. Though so much of it is written by men. Female voices have been lost or disappeared. But then almost all literature across the globe has been written by men. I wish I knew more about those lost female voices of the early 20th C Caribbean canon.

For me there is a Holy Trinidadian Trinity of current female writers: Vahni Capildeo, Shivanee Ramlochan and Dionne Brand. All three bring ideas around queerness and identity into sharp focus, oh, and much much more. Capildeo is a genius. Brand is too. Ramlochan is a Goddess, and I think she will emerge, over time, as the Caribbean’s most famous poet.  Trinidad, right now, is a riot of strong female voices  I think Nicholas Laughlin is a fine poet, too; so is Anthony Joseph. Oh, dear, I’m only calling Trini names. I think Marlon James is a boss. I love the short stories of Junot Díaz, he writes well about men and male Caribbean masculinity. I love Loretta Collins Klobah’s work too, out of Puerto Rico. Every BOCAS I leave Trinidad with a case load of new books; I’ve been following the current crop of writers closely, especially from Trinidad. There are names soon to merge too: Alake Pilgrim, Hadassh Williams and Ayanna Gillian Lloyd. Watch this space. Trinidad is booming with voices, mostly female. I’m aware of them and feel proud. The future is female, in Trinidad.

Sapiens, A Brief History  of Humankind by Yuval Noah Harari. Also, Everyone Knows I’m a Haunting by Shivanee Ramlochan.