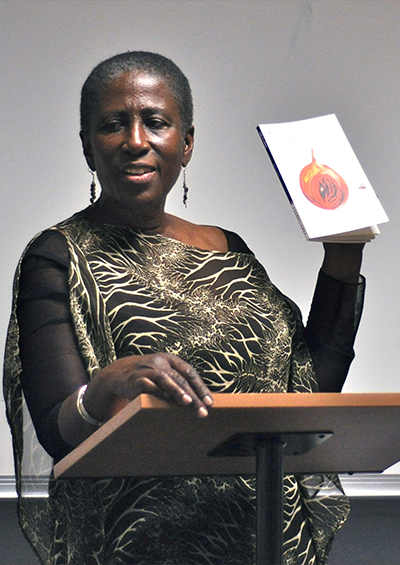 The first thing that I can remember feeling pretty proud of was done a very long time ago, and published in the school magazine when I was at high school in Grenada.  It was an admiring profile of one of the nuns who taught me.  Jacqueline Creft, who was an older student at the school at the time, was quite unimpressed by my choice of topic, and told me so.

I think I always write with the Caribbean in mind.  My voice comes from Grenada and, in my head, that’s my first audience.  In reality, I have to face the fact that my books are often not available in Grenada.  I write for everyone who cares to read, wherever in the world they may be.

Probably V.S. Naipaul’s A House for Mr. Biswas.  It was published in 1961, and by the mid-60s, in a high school that was a model of colonial education, I think Naipaul was thought worthy of joining Hardy by the time I was in fifth form.

Good question (see above).  In those days, Caribbean writing meant writing largely by men. I think of that now when I devise a Caribbean literature class with women writers (mainly or only), and someone comments that there’s no balance, meaning no male writers.  There was no balance then.  Rajkumari Singh’s publications may have been after the 40s and 50s, but her activist involvement was writing another story in the 40s and 50s.  I also thought Jean Rhys, but her writing in the U.K. was in the 30s, and then I believe it was the 60s before she was published again.  I’ve been listing Anglophone writers because I believe that’s the context, but I also think of the Puerto Rican Julia de Burgos and the Haitian writer Marie-Thérèse Colimon-Hall.

I guess the problem is not knowing all that I don’t know.  Perhaps it would be good to know more about all (‘discovered’ and not yet discovered), but I believe that many writers, even while reaching for publication and the publicity that usefully comes with it, also hesitate to reveal too much.

Perhaps Phillip Sherlock’s Ananse the Spider Man.  I’m tempted to say also traditional stories told at home, because they had such an impact on my later writing, but the important word there is “told.”  Those are not works “I have read.”

Absolutely.  I want to know all those things that I don’t know … about the (so-called) Anglophone Caribbean, but I also want to know about the other language groups.  I’m particularly interested in Haiti’s story because it’s so central to the Caribbean.

I’m focusing on the archives and particularly the stories of Africans and Indians being taken to the Caribbean.  I’m also reading Lauren Francis-Sharma, a writer who was born in the U.S., and whose parents are from Trinidad & Tobago.  In her first book, ‘Til the Well Runs Dry, she seems to be filtering stories she has been told of a life in Trinidad.