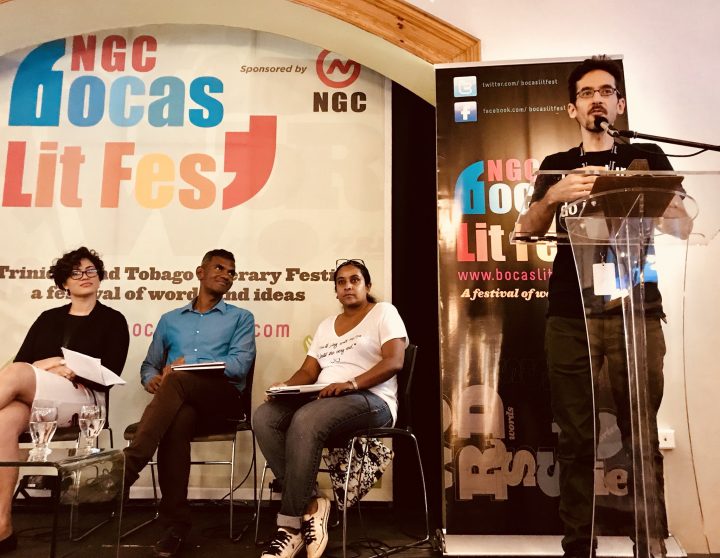 On Sunday April 29, 2018, I sat down at the National Library of Trinidad and Tobago near Woodford Square in downtown, Port of Spain with Nicholas Laughlin as the clock chimed on another Bocas Literary Fest. Nicholas is programme director of the festival which saw its 8th staging; it was my first experience. During those days before, I watched as he seemed to glide seamlessly from one event to the next making sure each one was on time and off to a good start. I was happy to talk with him about the festival, Caribbean literature and his approach to archiving.

Laughlin is editor of both Caribbean Beat, a print magazine and an online journal, The Caribbean Review of Books. Our conversation centred on how archives enrich or inform his work as an editor and he readily confessed to being a “packrat”. There is an interesting way he sees this translating to how he stores online interactions and digital files – the written pieces, photographs and layouts of the publications he works with.

He also explains how a chance sighting at the Alma Jordan Library, UWI, St. Augustine led him to finding a series of essays from C.L.R. James that had never been published as a collection. In, fact they had not been seen for decades.

“I really did have a feeling, looking at the microfilm, that no one had read this work for 70 years. I’m not a great Jamesian. I’m not at all an expert or some great James scholar. I was just intrigued by this piece that I read and I did this detective work and put the series of essays together.”

They were published in 2003 as C.L.R James Letters From London by Signal Books.

“What I find myself most drawn to and excited by (both in my own reading and in programming the festival) are voices and perspectives which are not what anyone would expect. I think that many of us, even here at home in the region –  we should know better – we sometimes have very narrow ideas of what the Caribbean is, or should be. What is a Caribbean subject or voice, or topic or question or anxiety, and I’m not keen on that. I think we are far more various than we give ourselves credit for.”

Listen to the interview to hear more from Trinidadian poet, editor, and BOCAS organizer Nicholas Laughlin:

Zakiya Mckenzie is a PhD student at the University of Exeter interested in the voice of Caribbean people in the written and spoken word. As a teenager, she wrote for the Jamaica Observer‘s youth-focused supplement and went on to intern at VP Records in New York. She has worked as a journalist in Johannesburg, a newswriter in New Kingston and a Caribbean TV show’s producer in the Bronx. In 2017, she completed a Master of Research degree in Environment, Energy and Resilience from the University of Bristol looking at the social and economic implications of  petroleum off Guyana’s shore. Zakiya is a volunteer producer at Ujima 98FM Bristol and host of The Griot Sound. She is also an Ujima Radio Green and Black Ambassador encouraging a better natural and built environment for people from all backgrounds