Lawrence Scott’s Witchbroom Archives: ‘the life of a book’ 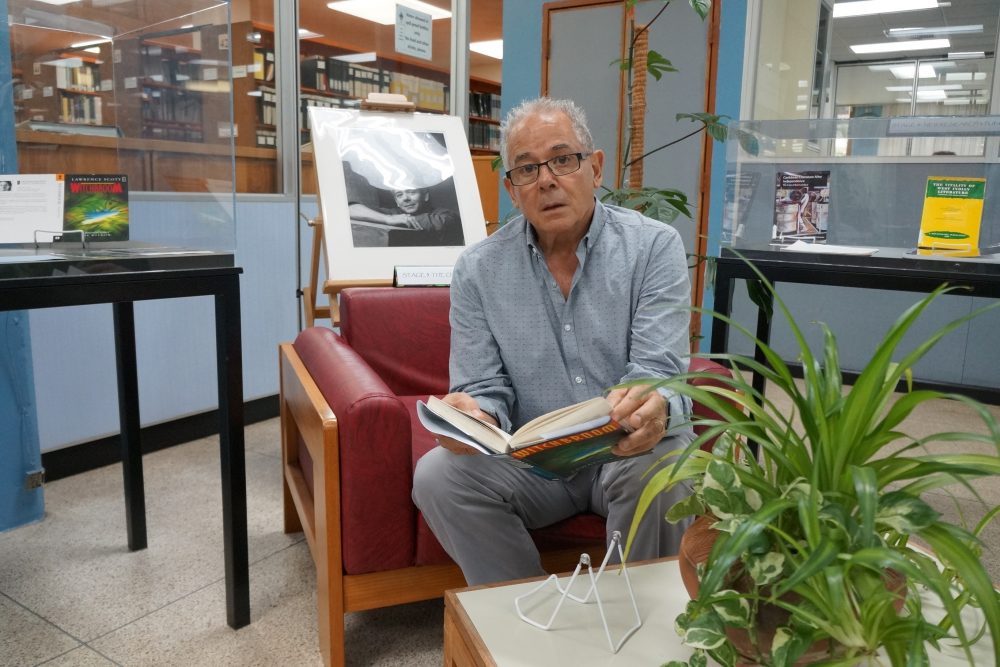 I knew that no words here would have been possible without the poetry, prose, history, painting, sculpture, the mobility of mas, the invention of pan, calypso and the spoken voice which had come out of the yard of this archipelago, and which invaded my ears, sitting on the sill of the Demerara window.

What does it mean for a writer to give the manuscripts and papers associated with their creative work to a library collection for others to read and explore? These questions of access and visibility were immediately centre stage at the handover ceremony of Lawrence Scott’s papers relating to his novel Witchbroom that took place on Thursday, November 22 at The Alma Jordan Library, University of the West Indies, St Augustine (Trinidad). Coinciding with the ceremony, the exhibition The Genesis of a Book: Lawrence Scott’s Witchbroom, curated by Lorraine Nero, Senior Librarian at the West Indiana and Special Collections, echoed some of the organizing principles of Scott’s archive, using its resources to tell “a story of how the novel came into being.” (The Alma Jordan Library at the UWI St. Augustine, Facebook Page, November 13, 2018).

The Witchbroom Archives offer a unique and vital insight into Lawrence’s first novel Witchbroom. First published by Allison and Busby in 1992 and shortlisted for the Commonwealth Writer’s Prize Best First Book, the novel was re-published in 2017 by Papillote Press in a special edition marking its twenty-fifth anniversary.

Back in January, I visited Lawrence at his home in London for an interview where we discussed the process of archiving his literary papers. My first question was about the contents of this rich archive.

My archive holds manuscripts, correspondence, reviews, articles, book publicity, audio-visual and increasingly digital items. The Witchbroom Archives (the first accrual of my literary papers) consists of manuscripts of different drafts of the novel and translations into French, including Christine Pagnoulle’s translation; audio cassettes of the novel adapted for the BBC by Margaret Busby and produced by Marina Salandy-Brown; research notes; book reports; reviews; book launch materials, academic writings on Witchbroom and correspondence. One of the highlights of this archive are the letters that Sam Selvon wrote to me when Witchbroom came out. There are also different letters from publishers and announcements of prizes.

During our conversation, Lawrence spoke about the significance of the decision to deposit his papers in Trinidad and his experience of working with the team of archivists and librarians at the University of the West Indies, St. Augustine.

I met Dr. Glenroy Taitt, Head of the West Indiana and Special Collections, at a book fair in Martinique and for about two or three years we were in conversation. Glenroy and Lorraine (Nero) were both very sensitive and very transparent about what it meant to give an archive over. They are interested in the archive of a life, and I am interested in that too, particularly in regards to Trinidad and its history.

Since first talking with Alison Donnell about electronic saving of materials, I have had discussions with Lorraine at the West Indiana Collection and will be awaiting advice from her about what they would be happy to receive electronically, and also what might be the best way to go about saving correspondence which is now hardly ever hard copy but overwhelmingly by email.  I feel to be in good hands with Lorraine and Glenroy, and of course Alison is the one who alerted me first to the importance of saving this part of my archive in this way.

I would like students to be able to visit the archive and look at the different manuscripts and novels, and see how they have very different structures in the first drafts. They won’t have access to the notebooks right away (as they haven’t yet been transferred), but they can access what is already there: the life of a book.

The archive can show that the book also had letters of rejections from some publishers that weren’t ready to publish it for various reasons, or the issue of trying to get an agent, you know? That is interesting to people as well, in terms of the life of a writer. It gives an insight into a writer’s career from when you are starting off: trying to get an agent and a publisher, trying to get on the radio (a lot of my early work was on the radio, the short stories). That’s also quite an important part of an archive.

The Witchbroom Archives offer an exciting opportunity for students and researchers of Caribbean literature. Dr. Geraldine Skeete, lecturer at the University of the West Indies, and scholar of Scott’s fiction, delivered the featured address at the Archives’ handover ceremony and highlighted Witchbroom’s continued relevance today, both in terms of its literary role and influence as well as its resonance historically, socially and politically, particularly in Trinidad and Tobago:

History and religion are two leitmotifs in Scott’s body of work – as well as carnival and calypso – and so too are those concerning issues of gender and sexuality. Therefore, while the chronicling of national and family history, for instance, is central to the plot, my particular academic interest in this novel is its portrayal of transgenderism which is also one of its focal concerns. The 25th anniversary in 2017 of Witchbroom’s publication and this handover ceremony of its manuscript and other archives in 2018 underscore the novel’s continued relevance and significance within the context of the recent legal triumph for the LGBTQI community in Trinidad and Tobago.  Here is a stark example of how literature contributes both to raising awareness about real world and lived experience, and to the sociocultural, religious, legal and political discourses pertaining to debates about sexual minorities, civil rights and sexual citizenship.

By re-publishing Witchbroom, Papillote Press —an independent press based in Dominica and London, specialising in Caribbean writing—, brings the novel to a new generation of readers in the region and internationally. I was in touch with Polly Pattullo, writer and co-founder of Papillote Press with Anne Jno Baptiste, and asked her to share her motivations for re-publishing the novel:

When, in 1992, it was published by Alison & Busby, I wrote a feature about Lawrence Scott and Witchbroom for the Guardian. A quarter of century on, I became the publisher of its second edition, which seems as relevant and seductive as ever: its hermaphrodite narrator brings a contemporary flavour to this sizzling, far-reaching history of Trinidad. Readers have been particularly drawn to its new way of looking at history, race and sexuality, and its treatment of women and gender. It was described as “rare and magical” by Sam Selvon and so it remains.

The archives are also an important resource for those interested in the translation of Caribbean Literature as translation manuscripts and correspondence are also included relating to Balai de sorcière, Christine Pagnoulle’s French translation of Witchbroom, which is forthcoming in 2019. Dr Pagnoulle, lecturer in Caribbean literature and translation at the Université de Liège, explained when sharing her experience of translating the novel:

Translating Witchbroom has been an exhilarating and indeed addictive experience. Just as Lavren moves in and out of past and future, you have to slip into the various voices that contribute to those Carnival tales. The most resistant are those that are marked by departure from Standard English since French has a far more normative approach to language use. This is where I relied on the invaluable help of Eric Maîtrejean (a Trinidadian from Lyon who translated some of Derek Walcott’s works) and Mylène Wagram, an actress friend from Martinique. I am also grateful to my late mother, who listened to me reading chapter after chapter and could immediately spot passages that were not quite right – and of course to the author, Lawrence Scott, for writing such fascinating novels and for being the wonderful person he is.

The Witchbroom Archives invite a myriad of approaches for research and teaching that can enrich and enliven literary criticism: from genetic criticism, concerned with the different creative stages of the documents involved in the creation of a literary work (from notebooks, manuscript drafts and typescripts to proofs), to publishing, book history and translation studies, as well as the study of creative networks.

The archives join one of the largest special collections in the Caribbean, home to the literary papers of C.L.R. James, Derek Walcott, Earl Lovelace, Roger Mais and Sam Selvon, among others. And as the literary archives of a novel deeply engaged in multi-layered storytelling and recordkeeping (through the characters’ oral narratives, journal entries, poems and written accounts hidden under floorboards that figure in the novel), their current location in the West Indiana and Special Collections at The Alma Jordan Library highlights their historical relevance even further.

Lawrence Scott is a prize-winning author from Trinidad & Tobago. He was awarded a Lifetime Literary award in 2012 by the National Library of Trinidad and Tobago for his significant contribution to the literature of Trinidad and Tobago. His second novel Aelred’s Sin (1998) was awarded a Commonwealth Writers’ Prize Best Book in Canada and the Caribbean (1999). His first novel Witchbroom recently marked its 25th anniversary of publication with a new edition (1992-2017). Scott is the author of  Leaving by Plane Swimming Back Underwater (2015), Light Falling on Bamboo (2012), Night Calypso (2004) and Ballad for the New World (1994). He is the editor of  Golconda – Our Voices, Our Lives (2009), a collection of stories, poems and archival photographs collected from an oral, Public History project conducted on the Golconda sugarcane estate in Trinidad. His website is: www.lawrencescott.co.uk

Caribbean Literary Heritage: who matters and who cares?
Celeste Mohammed on the archival inspiration for ‘Hart’s Cut’

1 thought on “Lawrence Scott’s Witchbroom Archives: ‘the life of a book’”