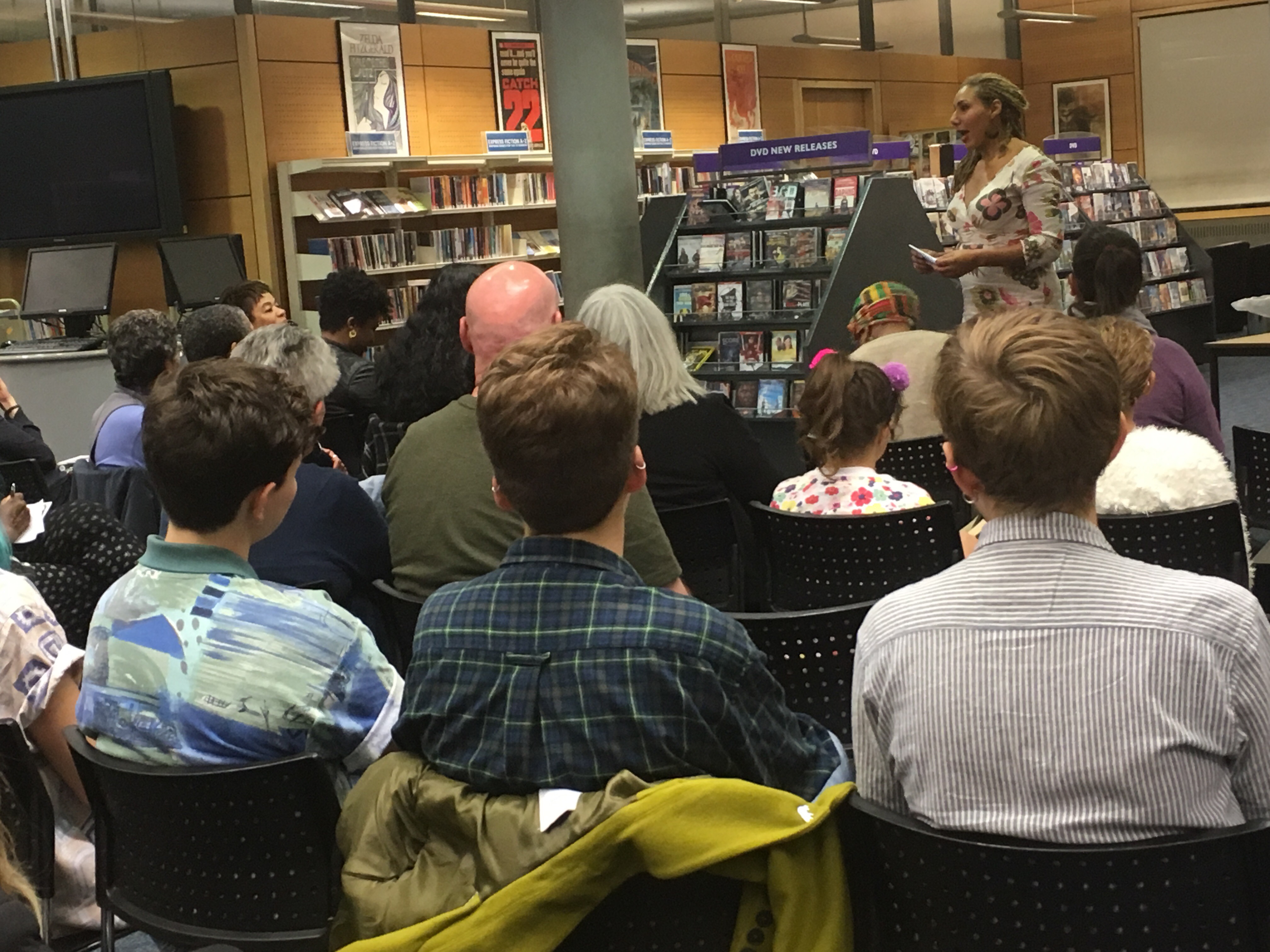 The Millennium library in Norwich city centre is the busiest lending library in the UK.  By 6pm on 16th October staff had arranged eight neat rows of chairs in the main room among the books for our Caribbean Women’s Voices event. Library staff are amazing and prepared – even for an event starting promptly as their opening hours end.

I joined the rest of the CLH team and gathered writers upstairs in Pizza Express for a light pre-match meal. We discussed the mystery of the anchovy; ‘imagine a really, really small sardine coated in brine for five years, but when it’s finished sucking up the five years-worth of brine they put it in more vinegar…’ explained award-winning writer Kei Miller.

In the hour we hastily ate, the chairs had filled with a hush of people. I wish I could speak to each person at the start of any event like this and ask them what brought them here, exactly. There was such a sense of appreciation for the readings. Concerns that without mics it might be too quiet were settled by people moving forward and leaning in; a reminder that a library provides the perfect conditions to listen to someone else’s story.

Claire Hynes introduced colleagues and students from UEA together with our visiting writers and Alison Donnell conveyed her warmth for the women whose words we were about to hear. Alison explained how the iconic BBC ‘Caribbean Voices’ radio programme, 1943-58, is renowned for shaping the careers of many of the region’s most celebrated writers including Nobel Laureates V.S. Naipaul and Derek Walcott. Far less attention has been paid to the women writers who contributed to the success of this programme and whose writings have helped shape the distinctive concerns of Caribbean literature throughout the last century. 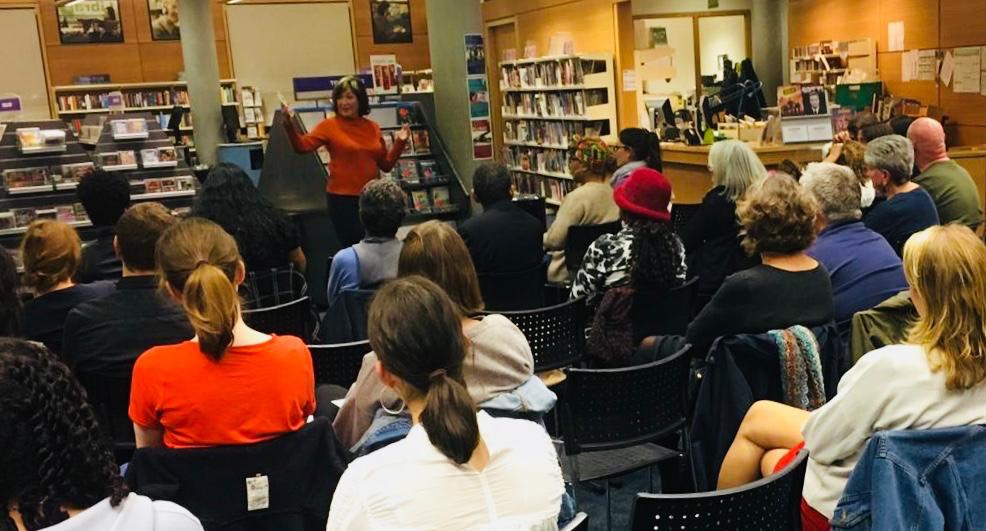 Kei Miller set aside his own writing and read gently a poem, The Peanut Boy, by Una Marson, the first female black employee at the BBC in 1941 and founder of the Caribbean Voices Radio Programme. 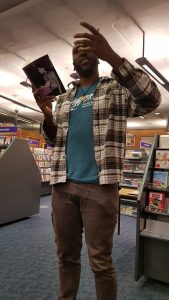 Tessa McWatt, who has recently joined us as Professor of Creative Writing at UEA read a short story, The Voice by Edwina Melville that had been broadcast on the programme in 1954. Living in the Rupununi savannah in then British Guiana, Melville wrote alongside taking employment as a schoolteacher and shop-holder and also served as a Member of Parliament for the People’s National Congress where she represented the cause of the Amerindians.

Shivanee Ramlochan read new work from fellow Trinidadian, Sharon Millar. Sharing first that she loves how Sharon captures the violence and voices of the stories she witnesses. You can read Sharon’s story here.

Ayanna Lloyd seemed to exhale three parts of Nourbese Phillip’s Zong!, a poetic work that reassembles the language of the insurance claim against the loss of 133 enslaved Africans cast overboard into a remarkable act of mourning and remembrance, after wondering if she could ever do such a work justice. You can listen to a live recording of the author here.

Shivanee finished the first half with a fighting cry for genre fiction’s place amongst Caribbean literature, giving the prologue to Karen Lord’s speculative fiction The Best of All Possible Worlds. Karen’s Redemption in Indigo video shot in Speightstown, created and produced by Gine On?! magazine and produced by Ayesha Gibson is available here.

During the interval I had the chance to hear the variety of voices in the audience. Jamie who bought Everybody Knows I Am A Haunting before the books were even out on sale, Bella who was one of two children in the crowd and the only person to bring her cup back, and the librarian, Jas, who had stayed two hours beyond closing to support our event as part of Norfolk Black History Month. Jas has been working for the library since she was 16. A round of applause for the broad-ranging enthusiasms of library staff, please.

The second half gave us four readings from Caribbean women writers gathered at the library.  There was no discussion of why or how to interrupt the flow and the time to settle into each new voice was a pleasure. 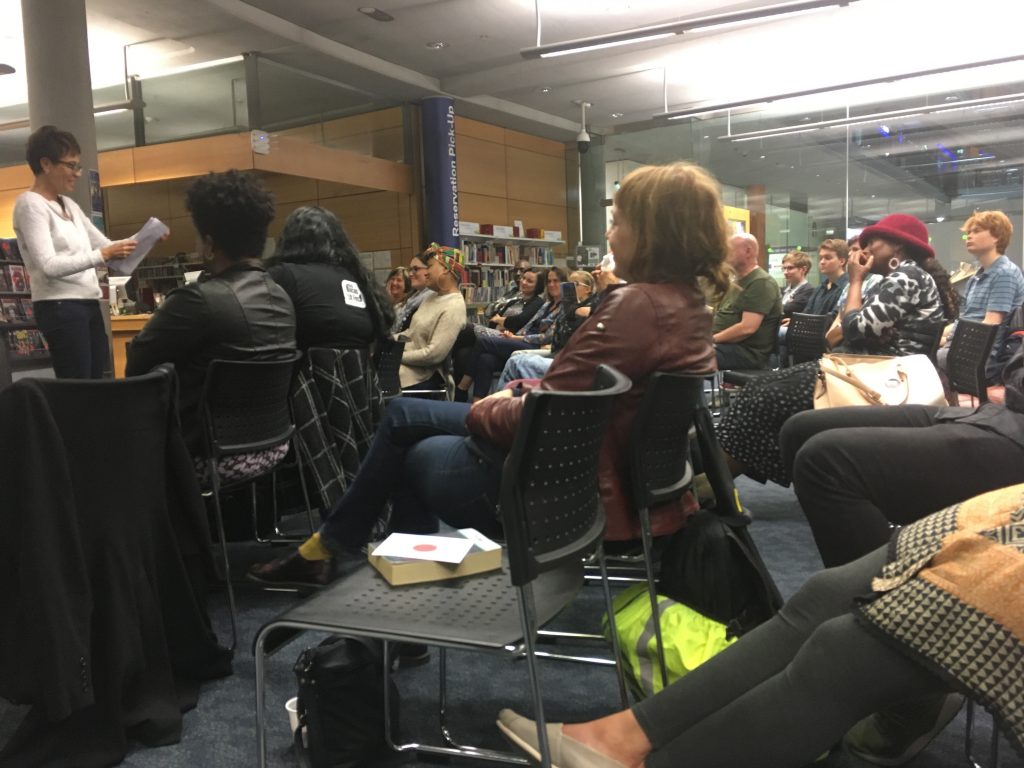 Tessa McWatt’s first reading from the manuscript of her memoir

The intent listening faces of the audience to such faithful sharing of stories has stayed with me this week.

Ayanna read some of her unpublished novel The Gatekeepers to us, but – I felt – for herself. Taking me and the rest of the room with her to a graveyard in Port of Spain.

Claire wove a response to A Room of One’s Own that landed loudly in her quiet voice. I’m still thinking about the sense of betrayal she felt following a lifelong, page-bound friendship with Virginia Woolf when she discovered her dismissal of the ‘negress’ one night in bed while reading.

Tessa read from her work in progress Shame on Me: An Anatomy of Race and Belonging for the first time. A generous sharing of voice that suited the shape that the evening had taken. The line that lit up for me recalled the moment that she became a writer: “In being asked to describe what I was and realising I did not know, I set off to find out.”

Shivanee also chose to meet us close up in soft voice and scorching form. She prefaced her reading of the poem Fatherhood by saying “I have not read this poem to an audience before. If you ask me about it afterwards I probably won’t answer you, or I’ll lie.” It came as no surprise when she spoke with everyone who asked and sold all her books.